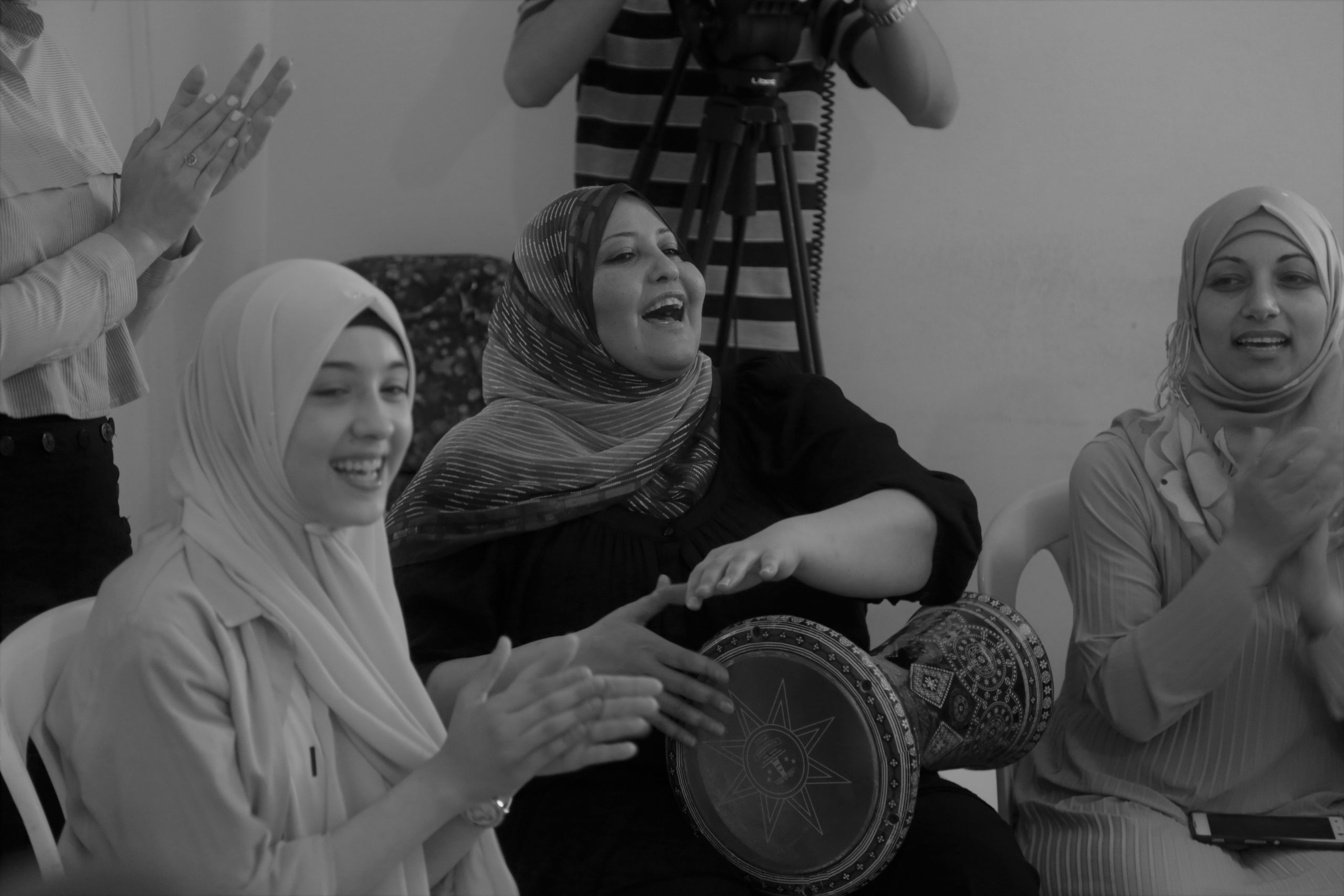 “I have started to breathe and feel more”

“When I was in Syria, I had a certain social status. I was a financially independent business woman. Yet, when the war happened, I became just a refugee.”

Fatima Khalife is the founder of Al Sama, a cooperative embroidery business in Burj El Barjne refugee camp in Beirut, Lebanon. She employs 15 women, some of whom are refugees too.

Just little less than two years ago, Khalife could not have dreamed of ever owning and running a business. She also could not have imagined ever again speaking about the traumatic experiences and painful emotions she had been denying and suppressing since fleeing Syria in 2013 due to its ongoing civil war. Then, two years ago, she enrolled in a drama therapy programme by Intisar Foundation and, slowly but surely, regained her calmness and inner peace.

“Before the sessions, I was closed off and resistant,” Khalife says. “I had pain and darkness within me. I was hostile and narcissistic with others. The sessions helped me remove this negativity from within. The sessions also helped me with my children who are the only thing that I love and that I still have since the war. I was not emotionally available to my older children, not even aware enough to notice them growing up around me. But I have changed this with my youngest child, and I want to be more Peaceful and giving to her. I also want to make it up  to my older children for not being like that.”

At first, Khalife explains, her participation in an Intisar Foundation’s programme seemed more as a fun activity and an outlet from the stress of work, but after only three sessions, she understood the larger significance of the programme. “At the beginning, it was a chance for me to let go of the stress of work and have a little bit of fun,” she says. “After three sessions, I realised that it was not just about having fun, but that there was something much deeper to it. For example, ever since the war in Syria started in 2011, I had had difficulties breathing, but during the sessions I had been able to regain my breath again.”

Drama therapy helped her rediscovered movement within her body which, she says, had been restricted ever since the war in Syria started Another realization was that, prior to attending the drama therapy sessions, she had been using her voice only to complain and express dissatisfaction, mostly during her many episodes of anger. After about five sessions, Khalife adds, she felt comfortable and safe enough to disclose personal information which, prior to that moment, she had not been able to share even with her therapist. Being in a group with other traumatised women helped her to again feel the emotions which she had buried but, in fact, needed to recover from, and so, Khalife opened up on the traumatic events which she had not spoken about in eight years.

“And here, I started a journey of finding my old self: a pre-war Fatima, a pre-migration Fatima, and a Fatima before losing her family members,” she says. “That was my starting point to becoming a new person. When I was in Syria, I had a certain social status. I was a financially independent business woman. Yet, when the war happened, I became just a refugee.”

Khalife’s story serves as a testament about how wars and forced displacement strip a person of their personal identity, reducing them to being nothing but a ‘refugee’. In addition, her story points out to how the stress of living in overcrowded and unsafe camps often turns refugees into people they themselves no longer recognise. “I have started to breathe and feel more, and to be more aware of my feelings, and of how I communicate with myself and my children,” Khalife says. “Also, my approach to my professional life has also changed, becoming much better. After almost nine years, I realised that I can use the calmness and peace in my voice to communicate better at work, and that I am actually able to reach the positions that I wanted to reach.”

With time, Khalife has lifted herself and those around her higher than she ever thought possible, fully realising the potential she was born with, she says. “For me, this is the start of a chain of success, not only for myself or for the 15 women whom I work with, but for all the women I could possibly reach through my business and through my knowledge of Intisar Foundation,” Khalife adds.

She expresses deep gratitude to HH Sheikha Intisar AlSabah and Intisar Foundation for helping her reach her true self and start anew. “I hope that my employees will be empowered by the Foundation’s drama therapy programmes like I have been, and it would be a continued success,” Khalife concludes. “I hope to see the Intisar Foundation reach refugee and war-affected women all across Lebanon.”

“I started a journey of finding my old self: a pre-war Fatima, a pre-migration Fatima, and a Fatima before losing her family members.”