Our 5th Drama Therapy Programme To Start In Bchamoun, Lebanon 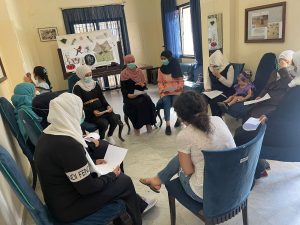 Intisar Foundation has started its fifth intensive drama therapy programme in Bchamoun, Lebanon, in collaboration with the humanitarian development organisation Anamel Center, with a group of 23 Arab women aged between 26 and 45.

The fifth edition of the programme is in line with the #1MillionArabWomenForPeace initiative through which the foundation aims to self-empower and psychologically heal one million Arab women impacted by the brutality of war and violence. 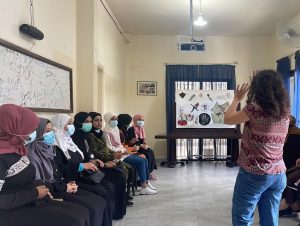 HH Sheikha Intisar AlSabah believes that providing psychological support to Arab women traumatised by war and violence can help transform them into the Arab world’s most prominent #Peacemakers. 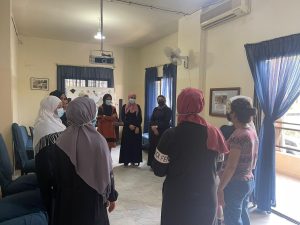 However, Farah Wardani, the Intisar Foundation’s leading drama therapist, says that the profile of the current participants is not much different from the previous beneficiaries of the Intisar Foundation, although the intensity of their mental health is escalating from one programme to the next. “These women have moved on from their initial trauma, which was the conflict they experienced while living in Syria, and due to the dreadful circumstances, economic and social conditions in Lebanon in which Syrian refugees are subjected to a significant amount of racism, they are experiencing increased levels of depression and anxiety,” Wardani explains. “Their daily lives are being significantly impacted by the economic difficulties.”

Razan Al-Houssami, Head of Anamel Center, explains that partnering with the Intisar Foundation helps her team to assist women affected by different problems (COVID-19 crisis, financial crisis, social unrest) to maintain optimal mental health in order to cope with these challenging circumstances. “To be quite honest with you, the refugee situation in Lebanon is a catastrophe, and people are getting used to this situation only because they have to,” Al-Houssami says. “Some who are experiencing depression are looking for organisations to provide them with psychological support, and then there are also those who really want to improve themselves and educate their children, but are unable to do so because of the difficult economic situation. This is why our work with the Intisar Foundation is so important – we are assisting these women to get back on their feet and have a different outlook on life and on themselves. To be honest with you, I wasn’t in Lebanon for the first drama therapy programme, but I used to receive footage and videos of the women dancing, laughing and expressing themselves, and I didn’t give it much attention back then. Once I returned to Beirut at the end of the programme, you would not believe the amount of joy and happiness on the faces of our employees and volunteers after the programme. At that time, I knew how important and effective the drama therapy programmes were.”